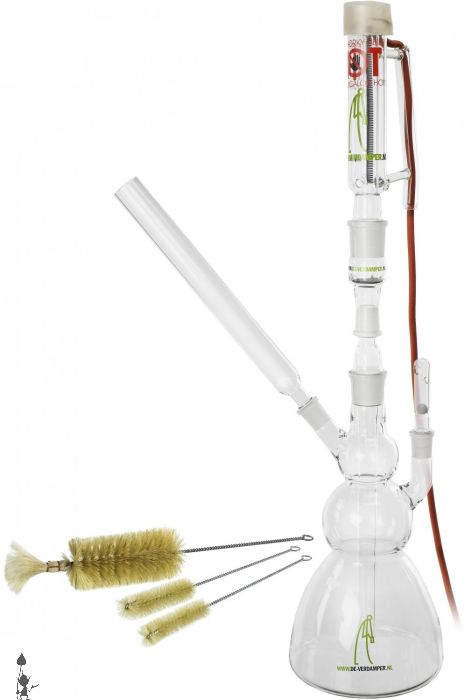 The effect of vaporizing is the purest high you can imagine

Most people smoke cannabis in a joint or a pipe. The Vaporizor can be used for heating dried plants (herbs), without burning, so you can inhale the etherical oils of the plants, without the unuseful bad compounts, such as tar. Some examples of plants that can be vaporized are:Eucalyptus, Mint, Marihuana, Chamomile, thyme, hyssop. After vaporising, when the plant is done a brownish powder remains, no tar or ashes!

Marihuana and hashish contain THC. This is the component of the plant which makes you high. With a Vaporizer you gently heat dried marihuana or hashish, without burning it, so the THC and the etherical oils vaporise. This way you inhale all the good parts of the plant without the tar and other unhealthy stuff. On the pictures you can see the cristals on the marihuanaplant ,which contains THC

HOW DOES IT WORK?

A Vaporizor consists of a glass system with a hot-airgun. The hot-airgun is adjustable between a temperature of 50 and 650 C. Hot air, ± 200 °C, blows through the head with marihuana into a resevoir with water, and is cooled and undone of little particles, which may have blown with the airstream. A soft aromatic vapor containing THC and flavors can be sucked from the long glass tube. The design makes it possible to have an overview of the process. A safety-valve prevents water coming into the head or hot-airgun, when one accidentally coughs into the vaporiser. By keeping the vapor in the lungs for a while, you increase the effect. Because the vapor is very soft this is quite easy.

Vaporizing has four important advantages above burning, as in smoking:Vaporising is a clean way of (non)smoking.You need less marihuana as you can re-use your dose three to four times in the vaporizor (Verdamper) with a good result.

A delicious aromatic taste of the flowers that is soft and gentle for the lungs is produced by the vaporizor.The effect of vaporizing is the purest high you can imagine.

Read the instructions before use. The heating element gets extremely hot: use the grip to hold it! Keep the element away from inflammable substances, pets and children. Turn the heating element off when not in use.