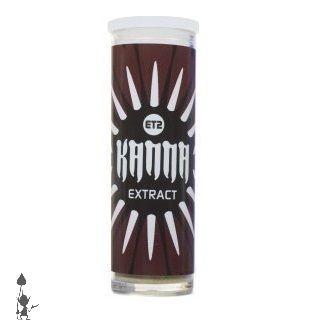 Kanna (Sceletium tortuosum) ET2 extract is best used as a snuff for a very strong and fast-acting euphoric effect.

This extract contains a much higher concentration than other extracts, making this ET2 very potent! Note that kanna ET2 extract is recommended for experienced kanna fans only.

Sceletium tortuosum is a small groundcover plant native to Southern Africa. There it has a long history of use. Written records dating back to 1662 show, that Sceletium was a bartering currency.

Kanna is a South African narcotic plant also known as Sceletium Tortuosum. Its relaxing property was discovered by the Hottentots (Khoikhoi) over 300 years ago. The tribesmen would chew or sniff kanna for pleasure.

ET2 is usable as a snuff and can be mixed in a tea.

Be careful of your dosage as this is a very potent kanna extract. Use 15 - 20 mg for a light experience and up to 40 - 50 mg for strong effects.

Kanna produces a number of closely related effects, including a general feeling of relaxation, social buzz and mental invigoration.

When sniffed, the onset is three minutes and effects last around 30 minutes. If you use this extract in a tea it won't be active as quickly but will last for much longer, up to two hours.

Sceletium tortuosum is a Selective Serotonin Reuptake Inhibitor (SSRI). It should not be combined with other SSRI's (Seroxat, Prozac) or Mono Oxidase Inhibitors (MAO-I), such as Syrian Rue (Peganum harmala), Banisteriopsis Caapi, Passionflower (Passiflora incarnata), Yohimbe, and certain anti-depressants.