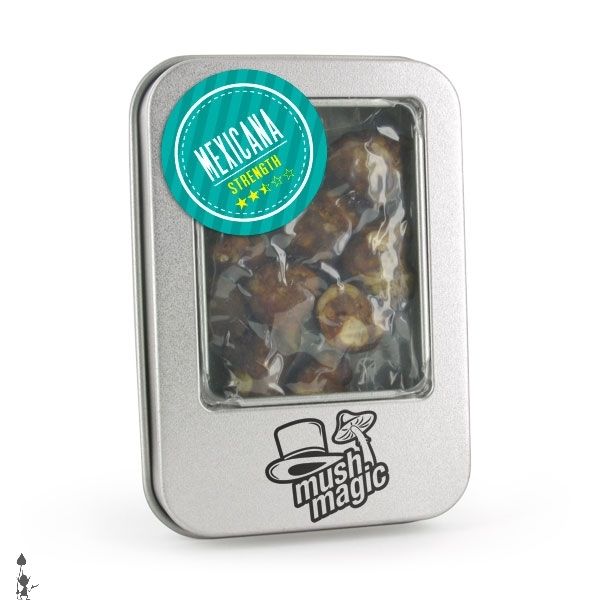 MUSHMAGIC
Be the first to review this product

Magic truffles contain the same active substances as the world famous magic mushrooms, also known as shrooms, paddo's pilze and psilo's. As a prodrug, psilocybin is quickly converted by the body to psilocin, which has mind-altering effects similar, in some aspects, to those of LSD, mescaline, and DMT. In general, the effects include euphoria, visual and mental hallucinations, changes in perception, a distorted sense of time, and spiritual experiences, and can include possible adverse reactions such as nausea and panic attacks.

Psilocybe mexicana - Flesh of the Gods

The Psilocybe mexicana has played an important role in the (recent) history of psychedelic mushrooms. The indigenous people of South America were familiar for thousands of years with the operation of psychedelic mushrooms, but this phenomenon has always been utterly unknown to the Western population. Only in 1957, it was Albert Hofmann (discoverer of LSD), who isolated and identified the substances psilocybin and psilocin in his laboratory in Switzerland. He did this with this species, the Psilocybe mexicana. The mushrooms of the Psilocybe mexicana had been artificially been bred specifically for this purpose.

Effects of the Magic Truffels "mexicana"

The effects of the Psilocybe mexicana are rather mild, but should not be underestimated at all. Most users perceive the reality pretty differently after only 5 grams of these truffles. Mild visuals, slightly sharper senses and a social notion will make you feel well, funny, confused, sometimes weird. One tends to "think outside the box" and be more creative and philosophical. All this is accompanied by a feeling of euphoria. Most users report this as being a fantastic adventure and experience - and not only because of the fits of giggles. Our overall rating for the Psilocybe Mexicana is 2.5 out of 5.

The Psilocybe mexicana truffles are the mildest in our range. The effects of fresh magic truffles are already present at a dose of 5 grams, but not very strong. From 10 grams on, we talk about a medium trip and a full pack of 15 grams results in a strong trip for most people. These amounts are averages and, since there are a number of variables present, such as sensitivity to psilocybin, body weight, full / empty stomach and so on, may be different for each person. Always start with a low dose. magic truffles can be eaten or used as a tea (let it simmer for 20 minutes, don't let the water boil). First effects are already being felt after 15-30 minutes.

Storage and warnings:
All of our truffles can be stored in the fridge in their original, unopened packages at least a month. Once opened they’ll only last about 2 days.

Remember, magic mushrooms and truffles aren’t party drugs. Many ancient cultures cherished them for their healing qualities and ability to stretch the human consciousness beyond its usual limits.

Never mix truffles with other drugs, including alcohol and medications. Never drive after taking truffles, and always take them in the presence of a trip sitter (a sober person).

Our truffles are not suited for minors under the age of 18, people with psychlogical conditions, or expecting mothers.

When stored unopened in the fridge, these truffles can stay fresh for up to a few months.

Utopia Truffles
As low as €20.00
Compare

Hollandia Truffles
As low as €19.00
Compare