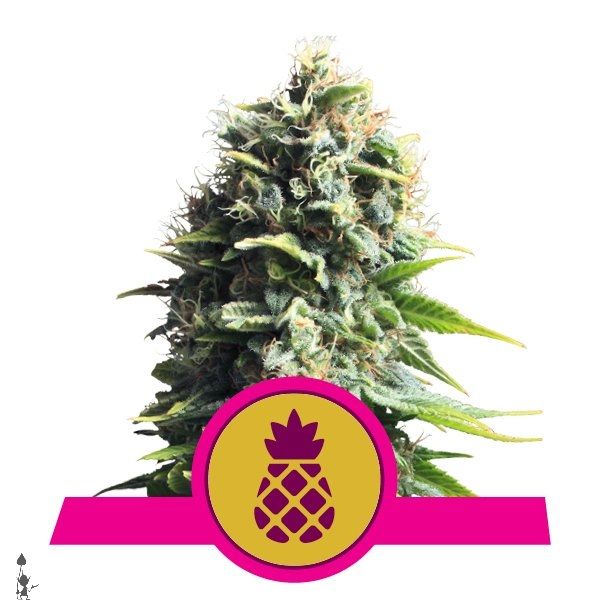 In stock
Only %1 left
SKU
rqs_pineapple_kush_fem
As low as €9.50
Share Add to Compare
Manufacturer:Royal Queen Seeds

Pineapple Kush may be a cross between two very popular strains, but the popularity it has amassed is as a result of the expert blending of those two strains. Whilst it is sometimes mistaken for Pineapple Express because both share a tropical taste reminiscent of pineapple.

This strain stands out because of the high potency that it possesses as a result of being bred from the well-known OG Kush strain; although it isn't quite as strong as the original, this strain certainly offers quite a considerable mental high.

The indica heavy blend of this strain, and the high CBD:THC ratio that comes as a result of that, means that it is an excellent choice for customers who are looking for something to help with anxiety or other related problems, like migraines, PMS or general stress. The strain has also been praised for having a positive effect on people who have Attention Deficit Hyperactivity Disorder or a reduced appetite. This effect that this plant offers is predominantly a head high but also offers some effect on the body - one of the primary appeals of this particular plant is its capacity as a relaxation aid for medical purposes. Combined with a tropical flavour and smell that make it appealing to seasoned smokers and non-smokers alike, these cannabis seeds will produce a plant that is a good fit for a range of purposes and customers.

One of the most attractive aspects of the strain is it's sweet taste, which whilst being quite heavy on the pineapple (as you might imagine), it has been described as having some light mint or vanilla flavour. Smokers have detected notes of caramel amongst the tropical aroma - the fruity scent of this strain is rather strong. As mentioned earlier, as OG Kush is well known as one of the strongest strains of cannabis, this fruity twist on kush does retain some of that strength - although it's physical effect is far less pronounced than its parent plant. The mental effects are somewhat comparable, though, making it a very appealing prospect for someone who is looking for a cerebral experience without so much of a physical effect.

These seeds have been feminized, meaning that your plants will all flower, which will happen after seven or eight weeks under normal circumstances. If you are planning to grow outside, the best time to harvest your plant would be the end of September.

If you are looking for a strain that offers great taste, a sweet smell and a very relaxing head high, Pineapple Kush may be just the ticket. Certainly, fans of the strain would tell you that if you were ever to have the opportunity to try it, this is a strain not to be missed.